The NJE with Adrian Sherwood


500 only, black vinyl with download code - All tracks exclusive to this release.

RSD Exclusive! The NJE’s BBC 6Music session + radical versions of classic tracks from their debut album, all mixed by On-U Sound legend Adrian Sherwood. Turn on, tune in and float off in dub… The NJE jumped at the chance to work with legendary On-U Sound producer Adrian Sherwood when it came up. And it came up twice in the same week in Spring 2018. The band was invited to play at “Sherwood At The Controls” a bi-annual event in north London. The night they opened proceedings was headlined by Asian Dub Foundation and featured DJs Steve Davis and Kavus Torabi. Mark, Terry and Simon had barely stopped grinning at the idea of sharing the billing with one of snooker’s greats when Gideon Coe’s producer phoned from BBC 6Music to ask if they could record a session at Maida Vale for the August Bank Holiday dub special broadcast. The answer was yes and they enlisted their new best mate Adrian Sherwood to provide the live dub mix. They got on so well that they vowed to work on new material – but in the meantime the band took four tracks to On-U headquarters in deepest Kent for Adrian to make special dub versions to compliment the BBC recordings. The BBC session appears on side one of this Record Store Day release and radical remixes of four tracks from The NJE’s debut, Afloat, comprise side two. Turn on, tune in, and float off in dub… Mark Bedford – Bass/FX, Simon Charterton – Drums and percussion, Terry Edwards – Horns and everything else.. Track listing: Side One – at BBC Maida Vale. 1 Mystified 2 Songo 3 6 Foot 2 4 The Long Tail Side Two – at On-U Sound 1 Voodoo Child 2 Afloat In Dub 3 The Freak Kings 4 Beachcomber In Dub 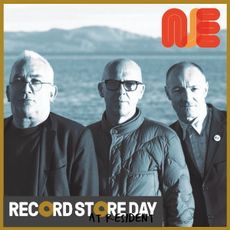