Stripped down to the roots, these 13 contemporary new versions of classic Jamaican recordings, originally from the likes of the Trojan and Studio One studios, are triumphantly fresh and channel Jamaica’s rebel music history.

With Rastafari sewn into its sonic seams, Inna De Yard remind us of Jamaica’s vast contribution to popular music around the globe with a cast of golden-generation roots artists whilst introducing a new class of roots-enthused artists from the island. Following the release of the album is a feature-length Inna De Yard documentary-film directed by Peter Webber (3 Oscar nominations for Girl with a Pearl Earring), set for its UK and international cinema release alongside European tour and summer festival dates including a special beach performance at the music industry Midem Festival in Cannes. After a sell-out debut tour in France in 2017, the trailblazing quartet of Ken Boothe, Cedric “The Congos” Myton, Kiddus I and Winston McAnuff join forces to front a cross-generational super-group of roots-reggae visionaries, featuring Jamaican vocal trio The Viceroys and Bob Marley backing vocalist and artist Judy Mowatt, as well as Jah9, Var and Derajah, three of Jamaica’s most stirring and spiritually-connected artists on the scene today. Overlooking the landscape and gripping heights of Kingston’s Blue Mountains, stands a house lined brightly with vinyl LPs & 45s, books and Jamaican art, with a terrace view that very few others can rival. It’s here, just outside Kingston in Stony Hill and surrounded by grounds of trees, wildlife and ancestral spirits that the ‘Inna De Yard: The Soul of Jamaica’ flame was first lit. Returning to Stony Hill the Inna De Yard crew call in an imposing ensemble of singing greats and renowned musicians to craft an absorbing collection of traditional, percussion-heavy reggae-soul. 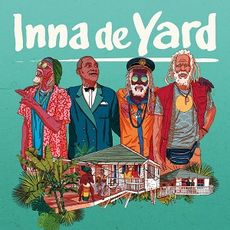