With glitchy synths, pulsing drums and catchy choruses, moa moa are proving that pop can be weird and accessible at the same time; the perfect psychedelic soundtrack to the comfortable tedium of life.

2021 saw moa moa ramp up the excitement around them with a pair of exquisite singles including the kaleidoscopic pop of ‘Drive’ – which features on forthcoming EP ‘Brain Feelings’ – and their Speedy Wunderground single ‘Coltan Candy’ which came out to rapturous acclaim from 6 Music’s Steve Lamacq, Huw Stephens, Don Letts, and Shaun Keaveny, and publications including NME, DIY, Paste Magazine, and Brooklyn Vegan. The band’s debut EP ‘Brain Feelings’ explores states of emotional suppression and emotional unintelligence. James says, “I often feel that, when balancing every aspect of my life, I don’t have time left to process and express my emotions. The feelings just get stuck in my brain, making me feel insular, disconnected and less able to participate in the world. It gets to the point where the only thing left to do is to shout something like 'BABY, I GOT THESE FEELINGS IN MY BRAIN 'as a semi-ironic way of expressing an inner universe unable to articulate itself” United by their love of wonky, chonky pop, friends Dan Byrne, Connor James, Sophie Parkes, and Matt Taylor assembled alongside songwriter and producer James Ratcliffe in 2019 to form moa moa. A mission statement emerged: to create unpredictable, ambitious, and hook-laden songs that take all the best bits from their diverse musical backgrounds. 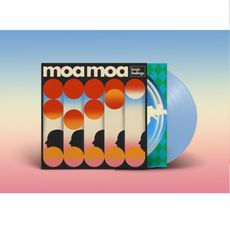