A timeless, vintage soul pours out of this majestic album that won us over at the beginning of the year.

Soft-spoken with the look of a slightly disa ected 1950s matinee idol, Aaron Frazer possesses a unique voice that’s both contemporary and timeless. On Introducing... -- his debut solo album produced by The Black Keys’ Dan Auerbach, co-released on Easy Eye Sound and Dead Oceans -- Aaron melds mid-‘60s soul with Auerbach’s particular sensibilities (‘Over You’), songs with a message in the key of Gil Scott-Heron (‘Bad News’), and uplifting tales of love told through a blend of disco, gospel, and doo-wop (‘Have Mercy’).

The Brooklyn-based, Baltimore-raised songwriter rst came into the international spotlight as multi-instrumentalist and co- lead singer of Durand Jones & The Indications, but he’s more than a revivalist act. “I didn’t want Introducing... to be an exact recreation of an era or a style,” Frazer says. “I’m excited to keep breaking some of the expectations around what exactly I’m supposed to be artistically and musically, or what this scene as a whole can be.” On Introducing..., Aaron expertly calibrates consciousness-raising and the desire to be enveloped by love. Where previous records were written in a partial state of turmoil, Aaron’s debut LP shows maturation and range. Introducing... is both loving and gracious, critical without losing hope, and a showcase of a young artist on a seriously soulful ascent. 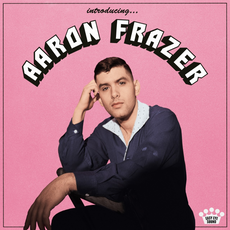