how blue can you get


a collection of previously unreleased songs from Gary's substantial body of outstanding work in his back catalogue.

The album contains 4 originals, and 4 songs previously recorded and made famous by classic bluesmen like Elmore James, Sonny Thompson, Memphis Slim and BB King. Venturing deep into the Moore family archives, some previously unheard and unreleased deep cuts and alternative versions surfaced to accentuate the beguiling mastery of one of blues' finest modern exponents. Amongst the songs are unheard and unreleased Moore originals - "In My Dreams," a lusciously glorious slow-moving ballad with every note and bend weeping as Moore pours out his heart along with the stunningly melancholic "Looking At Your Picture". The album kicks off a rip-roaring take on Freddie King's "I'm Tore Down," a Moore live favourite before he slips into a previously unreleased virtuosic version on Memphis Slim's "Steppin' Out." Elmore James' "Done Somebody Wrong," is another that showcases his blues chops, as does the enormous 7-minute never been released before scorching take on BB King's 1964 hit "How Blue Can You Get." An alternative version of "Love Can Make A Fool Of You," makes itself at home deep into the blues-rock heart of Moore, in a way that his most loved songs do, whilst the finale soars into the stratosphere with the beautifully aching "Living With The Blues." It's our hope that current and future generations of music fans discover and re-discover Gary Moore, revelling in the artistry of not just a great guitarist, but a supremely talented musician. Back to the future with Gary Moore. 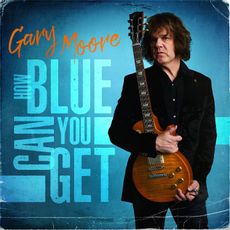