The first studio album in 5 years from The Boss sees him embrace a grandiose musical palette befitting the epic, sweeping landscape of an America that he has known and helped shape over the past half century.

Whilst it might, initially, seem like a departure from the furrow that he has successfully ploughed with the E Street Band, ‘Western Stars’ is still imbued with the same heartfelt sturdiness and dedication to character-driven narratives that have been Springsteen’s trademark since day one. Where previously guitars and saxophones might have soared, we now have strings, horns, and Moog synthesisers heaving emotional clout onto the tales of blue-collar life. From the grit of daily existence Springsteen deftly draws beauty and inspiration, only this time he has added an expanse of cinematic depth. “Western Stars is powerful enough to make you wish Bruce Springsteen would take more stylistic detours in future” 4/5 – The Guardian 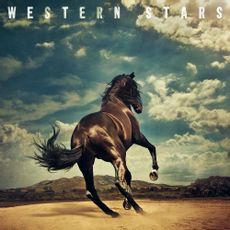