This 2CD remastered deluxe version contains a booklet with an interview with Bob Stanley and additional bonus disc containing demos and all of the B-sides.

‘Tiger Bay’ is the third studio album by Saint Etienne. It was released in 1994 by Heavenly Recordings. In an interview with Record Collector, band member Bob Stanley stated that the title is a reference to the 1959 film ‘Tiger Bay’. The album is described by Bob Stanley as “an album of modern folk songs done in Twentieth Century styles like techno and dub.” ‘Like A Motorway’, for example, blends Kraftwerk -style techno with the melody from the Nineteenth Century folk song ‘Silver Dagger’. Some of the songs, such as ‘Marble Lions’ and ‘Former Lover’ forsake electronics for classical folk instrumentation and orchestral arrangements. One, ‘Western Wind’, is a traditional English folk song. The original cover art is James Cook Harts’ ‘Welcome Bonny Boat’, doctored to include the band members. 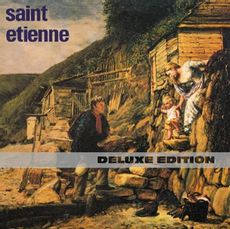