Live extravaganza from post-punk “sonic cathedrals” (The Independent), The Chameleons featuring live sets recorded in the ‘80s across two CDs and one DVD.

Featuring two live shows at The Hacienda and Camden Palace that have never been previously released on CD and an earlier set at the Gallery Club. Plus a DVD featuring all three shows and an episode of Catalan TV programme Arsenal devoted to the band Formed in Greater Manchester in 1981, The Chameleons pioneered post punk, combining Reg Smithies’ and Dave Fielding’s layered, shimmering guitars, drummer John Lever’s tribal rhythms and Mark Burgess’ driving bass and impassioned vocals with lyrics often reflecting the anxiety and alienation of the Thatcher era. “All tribal percussion and jagged guitar shards straining to frame vast vistas with one hand while clutching their alienated urban roots with the other.” NME The Chameleons are an acknowledged influence on future generations of indie and alternative rock bands including Stone Roses, Oasis, The Charlatans, Smashing Pumpkins, The Flaming Lips, The Killers, The Horrors, The National and Interpol. ‘Elevated Living’ includes their two celebrated hometown Manchester shows, ‘Live At The Gallery Club’ (1982) and ‘Live At The Hacienda’ (1983) and their superb show filmed for the ITV, ‘Live At The Camden Palace’ (1984) on both CD and DVD. The latter two shows are presented on CD for the first time. The DVD also includes an episode of Catalan TV programme Arsenal devoted entirely to the band. Broadcast in January 1986, it mixes four tracks taken from a live show at the Discoteca 666 in Barcelona from 1985 (also on CD) plus studio performances and interviews with singer/bassist Mark Burgess and drummer John Lever. The Gallery show includes rarities ‘Nathan’s Phase’ and ‘Things I Wished I’d Said’, while The Hacienda includes early versions of ‘A Person Isn’t Safe Anywhere These Days’ under the working title of ‘Men Of Steel’ and ‘Thursday’s Child’ as ‘Years Ago’. 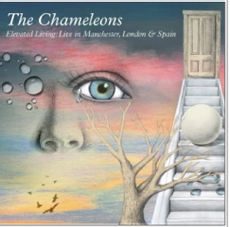