part no wave skronk, part yoko ono meets the b-52's, & part weirdo j-pop, on ‘reveille’ we find helter-skelterish flare-ups with primitive casio-like bloops & bleeps, angular fizz-pop guitars, & epileptic drum freakouts & songs featuring matsuzaki's purring falsetto which have an undeniable simplicity & sugar-soaked sweetness. “offers plenty of clattering fury-- just not as much as you may be used to. this time around, the gleeful chaos of their last 2 christmas cards from the asylum has been tempered into something more endearingly bizarre.” 4/5 – pitchfork.

leo recommends: "a beautiful reissue, on 180g blue vinyl no less, of the mighty san francisco art rock giants' 2002 masterpiece of chaotic, angular riffs, crashing drums & breakneck structures, topped with some of the cuddliest vocals you've ever heard. i was 16 when this album came out &, passed onto me by an older friend, i have always considered it a cornerstone of my musical education, so found this reissue particularly exciting & wonderfully nostalgic. sinking back into the album, i was pleasantly surprised at how fresh it still sounds & how much it exemplifies the sheer joy & eccentricity that made me fall in love with deerhoof. in fact 'this magnificent bird will rise' is undoubtedly among my favourite tracks ever laid to wax." 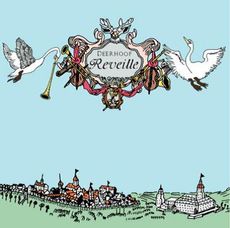