The starting point for Milk Man was a cartoon character created by Japanese artist Ken Kagami, a longtime friend of Deerhoof vocalist Satomi Matsuzaki. In contrast to the earnest guitar rock that predominated on their previous album Apple O’, Milk Man featured a broad palette of orchestral colors, echoes of music theater and camp, polished and gaudy arrangements, Stravinskian harmonies, and a more stylized, anonymous playing style resulting partly from recording most of the instruments at separate times rather than playing together as a band, and partly from many of the arrangements being created in a computer. Critical praise for Milk Man came notably from NME and Spin. The song “Milk Man” was chosen in 2009 as one of Pitchfork’s top tracks of the decade. 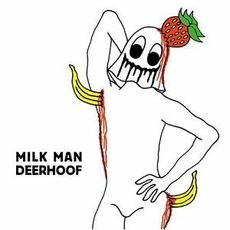