Follow us Follow us
Home  | out there  | lucy railton & max eilbacher - forma / metabolist meter (foster, cottin, caetani and a fly)

Cello recorded live in concert, performed by Lucy Railton. Serge Synthesiser recorded at GRM Studios in April 2019. Organ recorded in Skálholt Cathedral, Iceland, by Alex Bonney, performed by Kit Downes in 2017. All other materials recorded, mixed and created by Lucy Railton at GRM Studios and in her Berlin studio between November 2018 and May 2019. Mix by Lucy Railton / Premaster by Emmanuel Richier (GRM) Photo by George Nebieridze Part of Re-Imagine Europe, co-funded by the Creative Europe Programme of the European Union. ::::::::::::::::::::::::::::: Metabolist Meter (Foster, Cottin, Caetani and a Fly) Max Eilbacher 2019 / 22'29 Created and recorded November 2018-March 2019 in Baltimore, Maryland. Fly recording made September 2018 in Carrières-sous-Poissy, France. Made for the Présences électronique festival 2019 in Paris, France. Mixed from 8 channel to stereo August 2019. Flute by Ka Baird Text by Max Eilbacher / Text read by Alexander Moskos and Miriam Salaymeh Photo by Didier Allard © INA / Mastered by Giuseppe Ielasi / Cut by Kauffelt at Schnittstelle, Berlin, February 2020. Sleeve design by Stephen O'Malley Forma by Lucy Railton, is a work that digs into us. It disorients us, plays with us, but without malice. It is like a nocturnal butterfly whose wings reflect a dark light, thus projecting fleeting hallucinations, which nevertheless persist on the surface of our retina. Its trajectories, too, are unpredictable. But such disorientation is not that of a chaotic space, it is rather a mysterious reason that presents itself to us, an imperious unfolding whose logic escapes us, but which nevertheless fascinates. It is also a history of shapes and their becomings. A story, also of their own vanishing. Metabolist Meter (Foster, Cottin, Caetani and a Fly), by Max Eilbacher is a teeming piece, a matrix where textures and structures merge together, where the polyrhythmic instances become timbre, where the formal abstraction of the harmonic volutes coagulates around a vibrating form that is actualized in the dramatic reality of a dying fly. And this formal mastery is not disembodied in Max Eilbacher's work and the kaleidoscopic forms of the sound spectra that he has deployed know how to resonate in the sensations and experiences of each one. These two pieces have this in common, but each with their own agenda, that they evolve with grace and inspiration in the vast domain of the sound world and it is a great pride for us to present them in this new collection. Released in association with Editions Mego. Coordination GRM: François Bonnet, Jules Négrier  Executive Production: Peter Rehberg 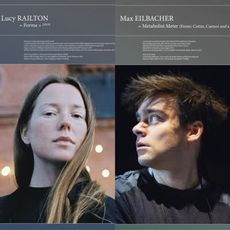