Finders Keepers Records’ continued and unwaning commitment to preserving the archives of composer Suzanne Ciani pays off in an avalanche of dividends with this latest master tape discovery, placing further markers in the historical development of electronic music and cinematic composition.

 Developed at a lesser-documented axis combining Ciani’s key disciplines as a revolutionary synthesist and an accomplished pianist, these early works from 1973 capture a rare glimpse of one of the world’s most important electronic music figures embarking on the early throes of a fruitful career as a film composer and sound designer with this rare and previously unheard documentary music illustrating the first-ever skier’s descent from the peak of the tallest mountain in Alaska.  Capturing innocence and optimism in its composition but never less than masterful in its realisation, ‘Music For Denali’ takes what would later become the yin and yang in Ciani’s versatile musical personality and provides unrivalled vistas from both side of the mountain, scaling a treacherous and fine creative line.  The music on this record was commissioned two years before Suzanne’s first Buchla concerts in 1974 and 1975 - which were accompanied by her seminal National Endowment Paper - and would reveal Suzanne’s proud commitment to the developed Buchla instrument and her confidence in its place in modern music, thus proving the likes of ‘Music For Denali’ to be an earlier showcase of the instrument in its advanced infancy, although still robust enough to carry the emotive and ambitious songwriting skills of the classically trained Ciani.  After hearing this record it will come as little surprise that the track known as ‘Ski Song’ would later be re-appropriated (and re-recorded) on Ciani’s globally critically acclaimed debut album ‘Seven Waves’ (as the Fourth Wave), which was initially released exclusively in Japan before Turkish-born electronic music pioneer Ilhan Mimaroglu signed the record to his Finnidar imprint at Atlantic records, thus making musical history for Suzanne as a widely celebrated American-Italian female composer. It stands as testimony to the composer’s determination and inventive nature that this single track, which would later make its way on to every future music best-seller list in the country, was originally composed on just piano and the modular synth model which she had helped to assemble on Buchla’s production line ten years before her Tokyo debut. “‘Denali’ was composed using just Buchla and piano,” explains Suzanne in 2020. “It was recorded at Rainbow Recording, which is the studio I found and shared with recording engineer Richard Beggs, who then sold it to Francis Ford Coppola after I fell in love and quickly moved to LA,” she laments. “If I had stuck around I would have probably ended up doing sound for Coppola,” she jokes. Instead, Suzanne would in a short time find her filmic feet in Hollywood (providing sound design for Michael Small’s aforementioned The Stepford Wives soundtrack) which would later lead to her winning the accolade of first female film composer to single-handedly record a major motion picture with The Incredible Shrinking Woman in 1982.  Unheard away from the original documentary screenings in the mid-70s, this soundtrack is available for the first time ever in any format with full cooperaiton and direct input of Suzanne Ciani herself. 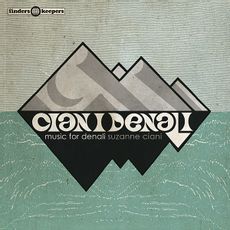