Long-time Muslimgauze fans with keen eyes and/or photographic memories may immediately notice something about the newly unearthed Sadaams Children album; with some slight orthographic differences, it just about shares a name with a short track from the classic Narcotic (Staalplaat, 1997; the similarity and the difference is pretty much expected from someone who both liked to reuse names and didn't care for consistency in spelling as Bryn Jones did).

While none of the four lengthy tracks found on Sadaams Children actually sound like sparse, clean string sounds of Narcotic's "Saddams Children", three of them never previously heard extended versions of tracks previously found on that release – well, one is both an extended and truncated version, but such are the idiosyncrasies and joys of the ever-complex Muslimgauze oeuvre. That extra-special track is the mighty, dubbed-out "Gulf Between Us", which does appear on Narcotic as a brief palate cleanser but in the same year was also released by Staalplaat as a standalone track in its ultimate, 23-minute form. That sprawling version takes a rather circuitous route as subtle electronic elements wear away at the track; the more compact 10-minute version here instead dials up the bass wobble for a track that's about as chilled as Muslimgauze ever gets. "Believers of the Blind Sheik" and "Effendi" are slightly more straightforward, in that both are about twice as long as their Narcotic excerpts, with the former's echoing drum hits and quiet pulse proving to be a natural fit with "Gulf Between Us" at the beginning of the release and the even sparser, slower building version of the latter seeing the album out in slightly abstract fashion. Before that track, however, there's the previously unreleased and similarly lengthy (at nearly 17 minutes) "Trikrit Brotherhood Quartet", the only track of the four here to get more of Jones' traditional layers of instrumentation and distortion to form a track that seems to shimmer in the summer air like a mirage. As "Trikit Brotherhood Quartet" winds its way from roiling static to more of Jones' classic use of hand percussion it's clear that these extended editions make for another compelling look at Jones' archives and the seemingly infinite flexibility of his muse. 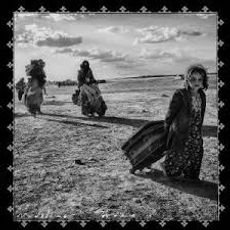