‘Originalitos’ is the follow-up to the 2016 album ‘Boleros Valses y Mas’, which featured a minimal and emotional take on Latin American standards.

‘Originalitos’ uses the same technological limitations as ‘Boleros Valses y Mas’ but features all original compositions. Throughout eight nostalgic original compositions created on the analogue Oberheim synthesizer, Frankie Reyes draws on his Puerto Rican heritage and the sounds of everyday life. Influenced by the traditional music of Puerto Rico and the music of Latin American and synth-based composers, Reyes’ compositions bring together traditional and modern styles, combining ancestral sounds with contemporary technologies. Reyes is best known for his work as Gifted & Blessed. He also releases music as The Abstract Eye and one half of duo The Steoples, who will release their second album ‘Wide Through The Eyes Of No One’ on Stones Throw soon. For fans of Emahoy Tsegué-Maryam Guèbrou, Dorothy Ashby, Mort Garson, Raymond Scott, Hailu Mergia, Sylvia Rexach. 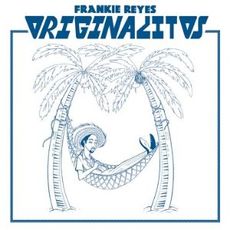