Thomas Köner is one of the most influential modernist minimal composers. His music is often defined as dark ambient or drone, because of the use of low frequencies, material from gongs, shadowy resonances and boreal ambience, but at the same time its sound with constant fluctuation and vulnerability of sonic events, what makes it organic, human and almost comforting. Köners soundscapes are no longer simply dark, the question now is that of a profound blackness. Such is the generic darkness of the abyss, the void and vacuum, the darkness of more than silence, of catastrophe and cataclysm, but also the soundscapes have utopian moments. It is a cosmological blackness, the black of nonbeing. The more subtractive, the blacker the sound synthesis, Köner writes. Such blackness is non-music. Music will never be music until it ceases to represent and begins to sound like non-music or monochrome. "Whoever hears the distortion of all sounds, will soon become Ultrablack. Whoever listens to this world, but has no affection for any of its sites, even to the place of Black Noise, may soon reach Ultrablack." Thomas Köner Aubrite was first released 1995 on the label Barooni. Roland Speckle helped with production of the album. Aubrite is the name of a group of meteorites named for Aubres, a small achondrite meteorite that fell near Nyons in 1836. 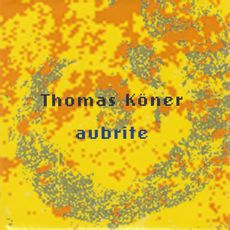