Get It In The End/You Don’t Get Me Down


Originally featured on the now out of print Wick Records: Battle of the Bands Vol.

1. The first time it's been pressed on 7”, Ask and ye shall receive! Upon receiving a bevy of positive praise for Benny Trokan's venomous salute to the (former) Cheeto©-in-Chief, "Get it in the End" (featured on the OUT-OF-PRINT long-player Wick Records: Battle of the Bands, Vol. I), we decided to offer this one up via the coveted 45rpm format. Written in haste shortly after its inauguration, Trokan warns of a day of reckoning for the flabby orangutan. Accompanied by an infallible bassline, spicy guitar solo, and a trap kit laser light show, this verbal assault and its freakbeat je ne sais quoi is the soundtrack henceforth into oblivion. On the flip you'll find "You Don't Get Me Down", a moody, grooving, albeit hopeful companion piece that serves as a palette cleansing juxtaposition to the peppery protest. Don't sleep on this one! 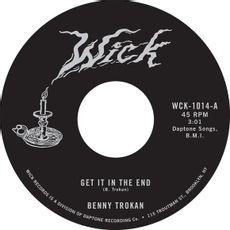