On one side, we have “Drums” from Laurie Spiegel’s 1980 experimental electronics album “The Expanding Universe”, a collection of tracks produced between 1974 and 1976 using a computer playing the actual sounds by controlling analog synthesis equipment under control of the GROOVE hybrid system developed by Max Matthews and F.

R. Moore at Bell Labs. Drums is a percussive seven minute computer generated workout inspired by Laurie’s interest in African and Indian musics, and which brings to mind the most far out kosmiche music of the period to modern day techno. A connection Ben has tried to make explicit by including it in his first BBC essential mix back in 2013. On the flip we have a track by Olof Dreijer from the Swedish band the Knife who’s work you might also be familiar with under the moniker Oni Ayhun. Back in 2009 his artist friend Adnan Yildiz curated an exhibition called “THERE IS NO AUDIENCE” in Montethermoso, dedicated to public imagination. Adnan commissioned a single piece from Olof called “Echoes from Mamori”, that played on loop during the exhibition and was subsequently released only on CD. A contemporary piece more clearly indebted to house music, Olof built the track around arpeggios generated using sounds of frogs he recorded in the Amazon and birds around Berlin, fed into a sampler. 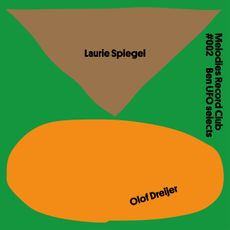