Distinctively exotic drifts of library music suffused with psych and next wave ambience, all collected from Joel Vandroogenbroeck's cult-classic Coloursound releases of the 1980s.

Leagues beyond the top-shelf work he'd done throughout the 70s with kraut-progsters Brainticket: these were new musical idioms to be explored. All tracks remastered from their original analog tapes! Far View is a compilation of tracks from Joel Vandroogenbroeck’s series of library music releases for the Coloursound label — a uniquely trippy catalog of music vignettes long overdue for their day in the library music sun, remastered from the original analog reels! The late Joel Vandroogenbroeck was among that rare breed of musician who defy all categorization, using music conventions to explore the far reaches of human and cosmic consciousness. After passing through the jazz and rock worlds from the 1950s through the 70s, Joel found new outlets for his expansive vision in the 80s with the Swiss library music label Coloursound. Far View draws tracks from these releases, which form a unique entry in the genre of library music. For the uninitiated, this is just one way to begin a brilliant musical trip through Vandroogenbroeck’s undersung career. A musical prodigy from youth, Joel arrived at Brussels’ classical Music Conservatory in the early 50s, but his studies were curtailed by the revelation of jazz. Soon, Joel was touring in groups around Europe and beyond with luminaries like Eje Thelin, Stan Getz, Bob Brookmeyer and Zoot Sims. As time passed, his musical consciousness continued to expand: time spent in Africa sparked a deep exploration of the music of the Middle East. The new rock sounds from England, like The Beatles and Jimi Hendrix, were mind-blowing. And from Germany came the krautrockers, with something completely else again. Vibing on the eclectic energies of the day, Vandroogenbroeck formed Brainticket, whose approach to composition fused jazz, rock, and a mélange of global musical traditions, combining a western rhythm section and analog synthesizers with an astonishing array of acoustic instruments; ethnic flutes, sitar, harp, kalimba and all manner of percussion. Steeped in diverse approaches of playing and listening, Brainticket drew from prog rock and psych, traditional sounds and minimalist music, all of which passed through their hands like the tributaries that formed the basis of what would soon be known as New Age music. In the late 1970s, Vandroogenbroeck began composing for sound libraries, with recordings to be used as underlay music in films, radio and television. Gunter Greffenius’ Coloursound Library was formed in 1979 with an inclusive vision of music, including experimental, progressive rock, and some of the earliest examples of ambient music — styles not well represented in other libraries. Coloursound gave Joel the freedom to create music in any style or genre, and over the next decade-plus, he embarked on a musical journey that is unmatched anywhere in the world of library music. Working under the pseudonyms VDB, Joel, and Eric Vann, his output on Coloursound is some of his most sublime and otherworldly — ranging from dark electronics to imagined music of the ancient past to ethereal ambient sounds of the future, which makes sense, as JoelJoel’s records were always ahead and in and out of their time. Joel VandroogenbroeckJ passed away in in December 2019, while work was being done assembling this collection. Curated by David Hollander, whose Unique Sounds album and book of the same name delightfully explore the library music world, Far View draws from ten of Joel’s Coloursound albums with lovely cohesion. Featuring brilliantly remastered sound, liner notes from David Hollander, album art designed by Robert Beatty and reproductions of the Coloursound album jackets, Far View is an entry point to Joel Vandroogenbroek’s mind-bending body of work — sonic soma to expand your consciousness and vibrate with the cosmos. 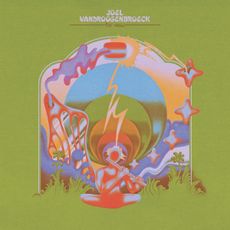