THE HOPE OF BETTER WEATHER


The new album takes his 2012 EP, The Hope of Better Weather, originally recorded by Price alone in a room with a piano improvising, and brings it fully to life with the addition of a series of reworkings by Yann Tiersen, Bill Ryder-Jones, Malibu, Peter Gregson and Eluvium.

He explains, “I wasn't trying to control what anybody else was doing. Everybody that joined in with the project gives their own little piece of freedom. I was really interested in what freedom we all give ourselves, as well as being fascinated to see what a little germ of an idea can mean to somebody else.” Listen to Yann Tiersen’s rework of ‘The Anatomy of Clouds’: LINK Listen to the original version of ‘The Anatomy of Clouds’: LINK The five pieces, alongside these new reworkings capture a stark beauty, tenderness and delicacy in their tone. But they are also wind-like in their shifting, expansive and elemental essence - capturing an exploration of the natural world. “Nearly 10 years ago when I recorded these improvisations, I felt like I was missing the natural world - things like the weather, the beach at Scarborough and all those kinds of visceral things.” When Price revisited the work in recent months - at a time when many of us found ourselves more aware of the natural world - he reconnected with it in a way that looks to connect with his next artistic steps. “You start off with listening to 10 year old piano recordings and then you go through the reinterpretations of people looking at that material now through their own lens. The fixation with weather, coastlines and with people connected with nature, is really strong all the way through this project. Coming out the other side of it, it's kind of like a Northern weather feeling - coming out with your collar turned up with a hat on, a bit drizzly and shit outside, but with a kind of determination that is the route forward.” 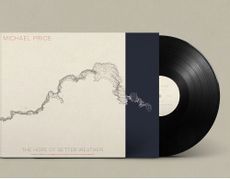