With this bristling collection of burbling beats and squirming synths, Martin Jenkins shows us yet again why he is a (if not the) leading light of the hauntological electronica genre.

Martin Jenkins builds up tension with his minimalistic synth sequences and dance floor abstractions; His masterful sound design creates a sense of awe and vast space as he takes us on a fantastic and exciting voyage from peril to redemption. Pye Corner Audio specialise in majestic, cinematic electronica that evokes sci-fi soundtracks, dystopian futures and the sound of haunted dance floors. The discography to date includes ten full length albums and many more singles and EPs across several labels. There are also remixes for John Foxx, Mogwai, Ride’s Andy Bell, Mark Lanegan, Alice Hubble, Stealing Sheep, Knightstown and Dolphin Midwives. Pye Corner Audio pieces appear in the soundtrack to Adam Curtis’s 2016 film HyperNormalisation, the 2018 Shudder TV series, Deadwax and forthcoming Netflix documentary Slay. The track “The Black Mill Video” was used for the title music of Sky TV’s 2019 sci-fi drama series, Curfew. Entangled Routes is the fourth Pye Corner Audio album for Ghost Box Records. It’s the third part of a loose trilogy of albums starting with Stasis in 2016 and followed by Hollow Earth in 2019. Each album is a kind of high concept sci-fi epic, the latest instalment of which plays with the idea of mycorrhizal networks and attempts by humans to listen in and communicate. As always with Pye Corner Audio and Ghost Box Records generally, narrative is not spelled out. It's only implied in the drama and mood of the music, with the help of careful attention to track titles and sequence and of course Julian House's consistently evocative artwork. 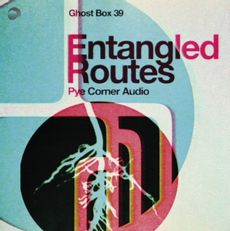