For the first time, the legendary frst two albums in this series are lovingly remastered and re-released after they had not been available for decades.

Klaus Schulze has entered into numerous, highly interesting collaborations in his long career - He always consciously looked for artists who were a complementary antipode, who inspired him and enriched his own world of sound.In Rainer Bloss, whom Klaus got to know by sending him a demo tape, he found a partner who had exactly these requirements.Rainer Bloss was a trained musician and composer who composed and produced numerous soundtracks for flms and music for theater plays in the former GDR until he moved to the Federal Republic of Germany He was also the head of the Rainer Bloss Sextet and a member of the band Wir. His virtuosity as a keyboardist, his very own compositional style, which at the same time allowed uninhibited improvisation, were the perfect prerequisites for a partnership with Klaus Schulze.After Rainer Bloss made his mark on the Klaus Schulze classic "Audentity" (1983, MIG01322), a nine-day tour with Klaus Schulze through Poland followed, which is featured in the famous live album "Dzi 281;kuj 281; Poland" (1982, MIG01442).Rainer Bloss had already outgrown the role of guest musician, which is evident not least from the fact his name appeared on the cover on equal terms with the names of both artists as the frst real joint work. During the long car journeys between the performances, the two musicians were often annoyed that there was hardly any music on the radio for long car journeys - and so the idea was born to record an album that was exactly suitable for this purpose. "Drive Inn" was produced in September 1983 and is a concept album in which every track revolves around driving a car. Framed by "Drive Inn" and "Drive Out", you are invited on an acoustic car journey, in which you both rest and linger.This concept was taken up again by Klaus Schulze and Rainer Bloss three years later: "Drive Inn 2" bears Bloss's clear signature here, Klaus Schulze composed the fnal "Highway" and was primarily responsible for the mix and production.The concept of "Drive Inn" accompanied Rainer Bloss until his premature death on December 10th, 2015: "Drive Inn III", produced in 1998, was the last album to be released during his lifetime. 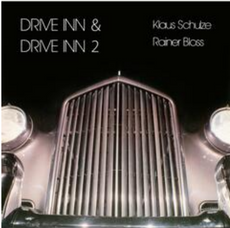