On its initial release in 1987, Hole in the Heart was a radical reinvention of Ramleh.

The band had split in 1984 after two years of power electronics noise assaults and it was assumed this would be more of the same. Listeners were in for a shock though. Gary Mundy, the sole survivor from earlier line-ups was a big fan of the writer Jean Genet and had been deeply upset to hear of his death and had recorded a four track solo tribute called Hole in the Heart using lyrics inspired by the book Funeral Rites but decided to release it as Ramleh. Musically it was a mix of trebly psychedelic guitar, noise, mournful hymn-like keyboards and distorted vocals with no obvious influences. It is often described as one of the best power electronics records of all-time but isn't really a power electronics record at all, although Ramleh needed to have been through that scene to end up at a place like this. If there is post-punk and post-rock, this is post-power electronics. It was released on cassette only on Broken Flag records and generally confused Ramleh's audience and vanished quickly. Further recordings in a similar vein were made using base sounds supplied by brothers Massimo and Giancarlo Toniutti released as Redcap, again on cassette only. A third tape called Pumping was released featuring the 23 minute epic True Religion. Again the music was met with little love. Then, an extract from True Religion called Bite the Bolster was released on the Broken Flag compilation Never Say When on vinyl and that got more attention. Over the years the tracks were shared between fans and through word of mouth people began to talk about these recordings as being in some way special. The track Product of Fear especially started to become mentioned as a classic track that needed to be heard and remains Ramleh's most listened to track. Ramleh still exist making records that are always unexpected. They are a band restlessly seeking new sounds and ways of expressing their vision of this strange thing called life. Hole in the Heart sounds like no other record by Ramleh or anybody else and has taken on a life of its own far from the cassette only tribute to Jean Genet that nobody heard back in 1987. 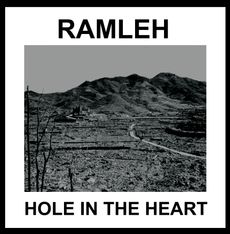