a collection of nine extended compositions for chamber ensemble and solo pipe organ.

The expanded instrumentation on this album includes carillon (a keyboard instrument comprised of very large cast-iron bells), choir, string quartet, low woodwinds, and trombone quartet, alongside sine tones and electronic drones. Among the pipe organs featured on the album is an extremely rare Italian tracker organ from 1742, housed now in the Southwest desert region of the United States. Davachi is accompanied in these recordings by a formidable group of musicians and interpreters, including Johnny Chang, Judith Hamann, Rebecca Lane, Andrew McIntosh, Mattie Barbier, Tiffany Ng, Jessika Kenney, Dorothy Berry, and the ensemble Apartment House. The carillon that sounds on the piece ‘Hall of Mirrors’ is the third largest in the world, with its heaviest bell weighing approximately twelve Imperial tons. The compositions of Two Sisters are all guided by a certain harmonic language and by a series of modal and cadential structures that have deeply preoccupied Davachi’s solo and chamber writing for the past several years. Perceptions of suspension and resolution are in some cases severely extended over a long period of time and in other cases are made to be circular, so as to undo the more typical sensations of sonic progression and pacing. Timbral homogeneity within the instrumentation and instrumental register of each piece is also of particular importance here, shifting the listener’s focus to the nuances of gradual variation as it happens texturally, microtonally, and acoustically. In fact, it is the collective goal of these compositions to induce a heightened harmonic and temporal space for both the listener and the player in equal parts; to give reverence to the practice of listening, to the active construction of space, and to the experience of moderated time. Various non-equal tuning systems are also observed in these compositions, including several forms of septimal just intonation, a “well” temperament, and the standard quarter-comma meantone temperament that Davachi often gives particular preference to. Iteration – that is, the notion that repetition with even the slightest deviations in articulation can reveal an endless capacity for altered perception – has been a constant influence in her work, and becomes especially meaningful in the context of tuning, where sustained intervallic patterns vary greatly depending on their function within the system. In most cases across Two Sisters, there is a constancy of chordal structure that is shifted in a unique way simply through voicing, as in the continual exchange of dyads that constitute the movement of the piece ‘En Bas Tu Vois’, for instance. Conceptually, there is a loose thread that runs through the compositional methods of Two Sisters, influenced by the allegory of ‘temperance’ in a minimalist aesthetic sense: “one foot on land, one foot in the water”, as it were, caught in the perpetual balance of restraint as delight and necessity. There are mirrored sonic and structural images throughout the album, also reflected in the iconography of the cover: the satyr and the subject, the shared gaze between head and body, the dialogue between cerebral and physical response, as above so below. It’s like there’s two sisters of faith and chance. 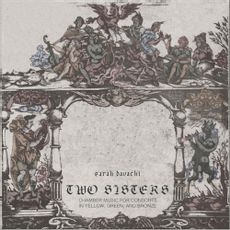 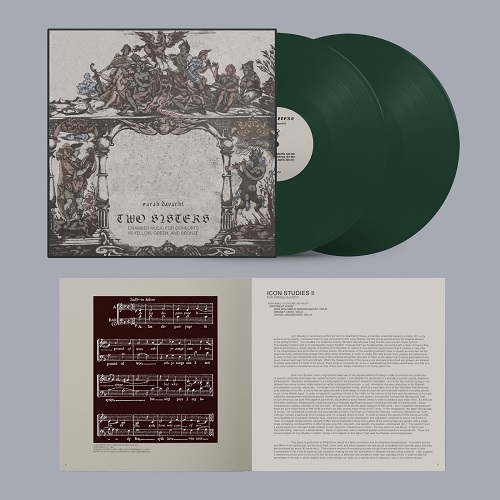 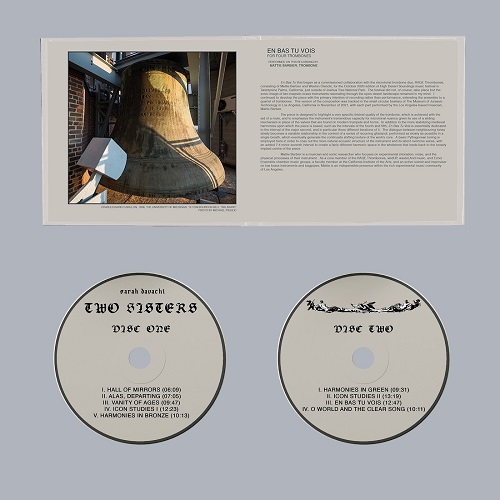