Roger Clark Miller is best known for being the guitarist in Mission of Burma, where he expanded the vocabulary of rock guitar playing by incorporating elements of free jazz and 20th Century classical music.

His "Solo Electric Guitar Ensemble" expands the vocabulary in a new direction, with or without rock music. When he began conceptualizing his "Dream Interpretations for Solo Electric Guitar Ensemble" in 2018, that previous set-up was the model. He now uses three lap-steel guitars on stands, two of them loaded with alligator clips or bolts, the other to a post-Glenn Branca full unison E. Using bass and tenor guitar strings, his previous prepared piano ideas fit into more portable guitars, resulting in percussive grooves, bass-lines, and similarities to the Chinese Ch'in. Looping technology has advanced considerably since 1983, and the new Boomerang III Looper presents much greater options for composing, layering, and altering sounds. Combined with new guitar stomp-boxes, many in stereo, the sound palette is enveloping. While the sounds produced are sometimes dizzying, they are always physical and made in real time. In performance, Miller sits in his cockpit, able to reach all four guitars and a plethora of pedals from one position. It requires intense concentration to play these compositions, but they could not have occurred any other way. 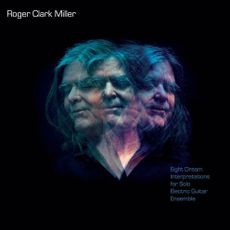