Fresh are back with their most confident album to date.

Filtering through the anxieties of fitting in and no longer questioning their impulses, the London group’s peppy pop punk has taken on new heights. Written over the course of never-ending tours with the likes of The Beths, The Winter Passing and Caves, frontperson Kathryn Woods says these travels informed a record that focuses on everything from love and independence to anger and frustration. While Withdraw has the stuck-in-your-head-for-days choruses that Fresh became known for on their debut, lyrically, Woods has evolved into an assured and visceral songwriter. She tried freeform writing for the first time and made a conscious effort to censor and question herself less when composing the songs. “I also tried to write with other people in mind. Normally these people were friends, which put me in a more compassionate headspace. I was influenced by Willa Cather, my friends, and my therapist,” she says. Once again recorded by Happy Accidents member Rich Mandell, Woods also pushed herself vocally. “As a woman in indie/punk, I felt like I had to sing a certain way/play a certain way in order to gain respect. I didn't want to push myself vocally on the first album because I wanted to be taken seriously as a guitarist, as a "real musician". This album doesn't have that fear because I realised that I can be a musician in whatever way I want, and that guitar and vocals don't exist in competition.” Withdraw is a record packed full of cathartic pop punk bangers that’ll have you singing your heart out. It’s an album that says it’s okay to be yourself, that it’s okay to feel everything all at once. 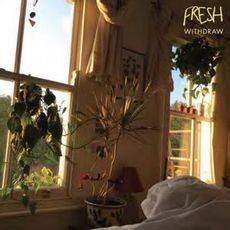