Frank Virtue and The Virtues are still associated with their only top 10 hit, Guitar Boogie Shuffle from 1959.

In addition to this rock 'n' roll classic, we have included two more ‘Guitar Boogie' recordings: an early version with the Esquire Boys (1953) and the Guitar Boogie Twist from 1960. Virtue, who sometimes called himself Frank Virtuoso, was indeed virtuosic. This is particularly evident in his arrangements of cover versions of famous classics such as Carl Perkins' Boppin' The Blues, Haley's Rock-A-Beatin' Boogie or Chuck Berry's Roll Over Beethoven, all in the typical style of the Philadelphia Northern band sound, which, as a further development of Lindy Hop, is absolutely amazing. This also applies to numerous original compositions. The overall picture is rounded off by instrumental numbers and twist songs from the early sixties. Included is a 36-page booklet in color with the Frank Virtue biography, which contains many previously unknown details and was written by the well-known music journalist Bill Dahl from Chicago, as well as rare photos and illustrations, plus discographical information on his releases from 1953 to 1969! Frank Virtue rocks, and The Virtues, too! 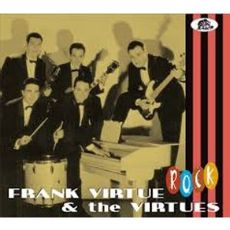