Jim Ford's previously unissued third album as it was intended to be heard  Restored from one of the few existing 12inch acetates  Re-mastered in magnificent full stereo hi-fidelity sound.

 Recorded in 1973 with the cream of Los Angeles' session musicians.  Deluxe 180gram vinyl album. Jim Ford left us with some mighty fine music and 'Big Mouth USA' is a full-length album completed for Paramount Records in 1973 - but never released until now. A twelve-inch acetate of the album circulated among a few people at the label, but only a 45RPM single was commercially issued. Thirty-six years later, Bear Family Records is proud to present what was meant to be the country soul singer/songwriter's third album. Be prepared for a country funk classic! 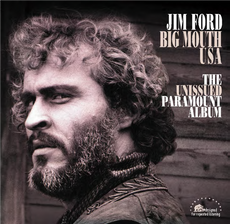