THE BALLADS OF CLYDE MCPHATTER


We can't rewrite music history, but we would like to shine a light on a great, influential and underrated artist: Clyde McPhatter.

 Whoever is interested in the history of American pop music will know the Drifters and the Dominoes - two formations, characterized and famous for the fantastic voice of the lead singer: Clyde McPhatter.  With two simultaneously released CD documentaries on Bear Family we honor the great life achievement of an important crossover artist, who has significantly influenced genres such as gospel, doo-wop, rhythm & blues and pop.  Our 'Clyde McPhatter Rocks' CD (Bear Family BCD17614) features Clyde's rousing up-tempo numbers; now here is the compilation of his most moving ballads on CD, carried by one of the most beautiful black voices of her time!  Extensive liner notes by Chicago expert Bill Dahl, detailed richly illustrated booklet and premier sound quality. Few soulful voices of the 1950s and '60s could caress a ballad the way Clyde McPhatter did, seemingly without even trying. He could make any song soar heaven-bound with his gospelsoaked curlicues and unpredictable twists and turns, helping greatly to define the concept of soul music. Bear Family's bountiful collection of the rhythm and blues legend's ballad output takes an in-depth look at his seminal Atlantic Records years, focusing on his solo period but also including a handful of dreamiest entries as lead singer of The Drifters as well as both sides of his duet single with Ruth Brown. Clyde's Treasure Of Love, the wrenching Without Love (There Is Nothing), and Just To Hold My Hand were major solo hits for Atlantic. There's also a generous helping of McPhatter's subsequent M-G-M and Mercury output. Clyde will CLYDE McPHATTER THE BALLADS OF RELEASE DATE: MAY 7TH, 2021 LABEL: Bear Family Records CATALOG #: BCD17615 FORMAT: CD PRICE: £ 9.99 GENRE: Rock ‘n’ Roll, Pop BARCODE: 5397102176159 always rank with soul music royalty—and these majestic ballads testify as to why he's such a regal figure. When Clyde McPhatter died in 1972, impoverished, addicted to alcohol and plagued by depression, the world looked back on a 22-year recording career of an exceptional musician who died at only 39 years of age. At the age of five, he was already singing in the gospel choir of his father, a Baptist preacher in North Carolina. The family eventually moved to New York City, where Clyde formed a gospel formation, the Mount Lebanon Singers, in the late 1940s. As a singer, he won a coveted 'Amateur Night' trophy at the legendary Apollo Theatre in Harlem in 1950 and accepted an offer to become the lead tenor singer with Billie Ward & The Dominoes, one of the most popular R&B vocal groups in the entire country. In 1953, McPhatter parted ways with Ward, was tracked down and signed by Atlantic head, Ahmed Ertegun. Condition: the formation of his own vocal group. The result: The Drifters. But he also left this formation after only a few years and concentrated on a solo career. He recorded the first great achievements, parted with Atlantic Records, switched to M-G-M and later Mercury. But further great successes and especially recognition failed to materialize. Frustrated, he moved to England for two years in 1968, tried an ineffective comeback after his return and died of multiple organ failure on June 13, 1972. McPhatter left us a magnificent legacy of melancholy ballads. The unique singer truly deserved more recognition during his lifetime! To complement this compilation of his best ballads, we recommend 'Clyde McPhatter Rocks' (BCD17614), featuring the outstanding up-tempo songs of Clyde McPhatter. 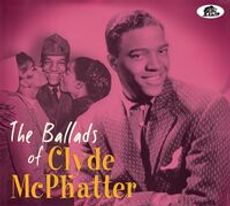