Follow us Follow us
Home  | Coming Soon  | that'll flat git it! vol. 36 from the vaults of tnt records - various artists

THAT'LL FLAT GIT IT! VOL. 36 FROM THE VAULTS OF TNT RECORDS


The vast Texas recording legacies of Houston and Dallas have been celebrated for more than half a century, and rightly so—the Lone Star State’s expansive musical smorgasbord is as impressive and wide‐ranging as that of any state in America. 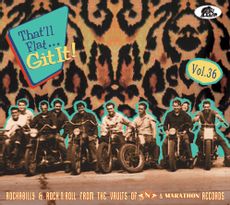