The Knife continues its 20th anniversary celebration as the duo of Karin and Olof Dreijer revisit Deep Cuts, a Trojan horse of a pop record that dreamt of a revolution.

To celebrate the record, the band today releases the digital format of “Pass This On (2005 7” Rip),” a live studio version of the track from The Knife’s first-ever performance. The song was initially included on the Pass This On special limited edition 7” vinyl released in 2005. The Knife has also announced a limited edition magenta colored pressing of Deep Cuts available August 20. “Pass This On” marked another crucial step forward for The Knife as they moved on from their DIY music video roots to embrace a more traditional filming approach alongside noted director Johan Renck (Breaking Bad, Chernobyl). Inspired by Karin’s love of Pedro Almodóvar films, the video features a drag artist performing for a group comprised of mostly men in a local meeting hall. Reflecting on his work with The Knife, Renck says, “At times, in work, one is propelled into the holy enigma, taking ones experiences to previously unvisited paradigms. That’s exactly where you wish to find yourself; a place that is profound yet playful, idiosyncratic yet relatable, mercurial yet sharp as that blade. This realm brings forth the best of your inner life, and they created it. It is all about them. I have yet to encounter people I respect and admire more than Karin and Olof.” Deep Cuts’ “Pass This On” and “Heartbeats” represent two of the most overt pop songs in The Knife’s catalog and helped propel the band’s profile to new heights. Fellow Swede José González introduced the track to a fresh audience via his tender acoustic guitar cover that went on to be featured in a massively successful Sony Bravia commercial. “Heartbeats” and its tale of instantaneous, fervent love became one of the most celebrated electro-pop songs of the 2000s. Pitchfork included it at #15 on their list of the decade’s best recordings saying, “each version of ‘Heartbeats’ is a miracle in its own right, highlighting a different aspect of the same incredible, life-affirming experience.” The Knife sought to imbue Deep Cuts with allusions to their socialist political ideals via the democratization of art. The duo conceived calypso-tinged electronic pop and used it to rail against ingrained structural entities such as the police state, toxic masculinity, and domestic abuse. It was a spoonful of auditory sugar to help offset the bitterness of a dark reality. Deep Cuts offered a chance for people to dance while confronting a troubled world. Karin and Olof are also offering new insight into their catalog in reverse chronological order. The snippet below is from an August chat the pair had with journalist Ruth Saxelby about Deep Cuts and its radical underpinnings. THE KNIFE ON DEEP CUTS Deep Cuts is the 2003 album that lives up to The Knife’s name. A seething dissection of the status quo dressed up in the most delicious of hooks; a Trojan Horse of a pop record that dreamt of a revolution. Olof: “I liked the idea of packaging socialist and feminist ideas in a pop format because I believe that strategy. I don’t think it’s a great idea doing experimental music that only the elite understand.” Karin: “Making Deep Cuts, yes, we had quite a clear idea. It was trying to make something more modern. We decided to use plugins and programs that were cheap or for free.” On their second studio album, The Knife’s storytelling is sharp enough to draw blood. Everything is fair game for the chopping board: an abusive relationship, the patriarchy, heteronormativity, the police state. There is confidence and clarity in the album’s skewering of oppressive structures, but also admissions of severe anxiety. To survive modern day society is to dance between public and private selves; to push against conventionality and somehow still find space to heal. Satire is the stone to The Knife’s blade on Deep Cuts, but it’s their earworm melodies that really did damage. Their sonic arsenal included serrated synths aplenty and lots of steel drums. Karin: “Yeah, we kind of liked steel drums.” Olof: “Electronic plastic fake ones.” The album’s biggest hits — “Heartbeats,” “Pass This On,” and “You Take My Breath Away” — spliced their singalong choruses with an urgent queer sexuality: “I don’t like the straight way,” informs the latter. To date, their dalliances with pop’s primary currency, the music video, had circled more DIY forms. But they took a chance on something more polished for “Pass This On’s” intriguing tale of infatuation. Karin: “Yeah, it’s a fun little play. I remember the video shooting. It was the summer of 2003. I was very into [Pedro] Almodóvar movies, and his film High Heels has a drag person singing a song. I saw this Swedish performer, Rickard Engfors, and I thought it would be amazing if he could sing this song.” Olof: “Johan [Renck, the director] came to us and asked if he could do a video. We were a bit hesitant in the beginning.” Karin: “But then we said, ‘We have this idea with this Almodóvar film, if you want to do something like that.’” Olof: “We hadn’t done an expensive video production before, and he came with those resources and experiences. I would say that he added a lot to this idea that gave the video a really interesting context.” Karin: “He came up with the setting and all the other people in it. Olof is there and I am there in the background. I still think it’s a very beautiful piece.” 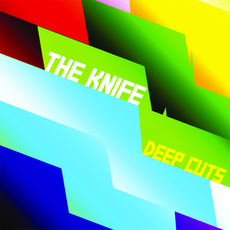