Sulatron Records is very proud about a release of one of THEE neo-psychedelic kultbands from UK: Sun Dial! Founded 1990 by multiinstrumentalist Gary Ramon who also plays in several other bands and projects.

He also runs the well known Acme-records label. Sun Dial’s debut album „Other Way Out“ was a true impact in the psychedelic music scene and is still a highly rated album! Now Sulatron-Records is releasing their 2012 album „Mind Control“ in THE ULTIMATE EDITION on double LP and double CD, including 2 bonustracks, from the same recording sessions, on LP/CD one. AND a complete disk with previously unreleased tracks from the same time! What you get is a blend of psychedelic tripping guitars, krautrock, and electronic wizardry. The band invited Hugo Chavez-Smith to produce „Mind Control“. And Hugo was involved in the debut Sun Dial album "Other Way Out" - so you know what to expect 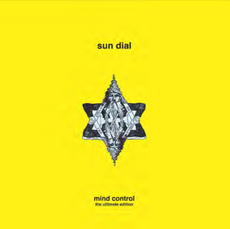