THE LATEST SHADE OF BLUE


No one in the world does a better job of protecting, loving, and preserving music than Bear Family Records.

I believe we have over one hundred of their albums, CDs, and boxed sets in our library. Each and every one a treasure. ‘Latest Shade of Blue,’ The Columbia Recordings 1973‐1976 is the third boxed set of my work to be offered by Bear Family. It's an honor, and just as much an honor to share it with you! Please enjoy”. ‐‐ Connie Smith  Connie Smith is one of the touchstone figures in Country Music.  Her complete COLUMBIA recordings from 1973 to 1976.  9 albums on 4 CDs – from gospel and Christmas songs to classic country and pop.  The accompanying 96‐page book includes dozens of previously unpublished photos, a detailed discography, session‐by‐session discussion of the making of the records, and an overview of Connie Smith’s life as she balanced session scheduling and Grand Ole Opry and touring performances while being, by this time, an actively involved, dedicated mother of five.  Introduction by Connie’s husband and musical collaborator Marty Stuart, who has now joined her as an inducted member of the Country Music Hall of Fame.  Includes all of the tracks from the second chapter in Connie Smith’s epochal recording career, as she moved to the Columbia Records label from RCA Victor in 1973—and the first reissue of the majority of them. CONNIE SMITH THE LATEST SHADE OF BLUE Release date: December 03, 2021 LABEL: Bear Family Records CATALOG #: BCD17609 FORMAT: 4-CD box set with book PRICE: £ 49.99 GENRE: COUNTRY MUSIC BARCODE: 5397102176098  Classic, infectious 1970s honky tonk singles such as Ain’t Love a Good Thing, her own co‐write You’ve Got Me Right Where You Want Me and her hit takes on the Everly Brothers’ (Till) I Kissed You and So Sad.  Dozens of out‐of‐print and long hard‐to‐find recordings, including her, unforgettable Christmas album ‘Joy to the World,’ shaped by her own arrangements of sacred holiday songs, and the singular, history‐making ‘Connie Smith Sings Hank Williams Gospel.’  Connie Smith’s riveting interpretations of prime era country songs from the pens of Dallas Frazier, Don Gibson, Bill Anderson, Doug Kershaw, Tom T. Hall, Lefty Frizzell, Harlan Howard, Eddie Raven and Jessi Colter.  Connie’s deep grounding in country gospel music applied to introduction of new songs in the genre by Kris Kristofferson, Dolly Parton, Porter Wagoner, Larry Gatlin and Dottie Rambo, in addition to that full album of eleven Hank Williams gospel songs.  New exploration of the steel guitar foregrounding ‘Connie Smith sound’ as she performs virtual vocal‐guitar duets with steel heroes Weldon Myrick, Lloyd Green, John Hughey, Jimmy Day, Buddy Emmons and Hal Rugg.  Detailed stories of Connie Smith’s close work with Columbia producers Ray Baker and George Richey, as they arrived at the song choices and up‐to‐date, yet traditionalist sounds that brought her through the pop‐centric John Denver‐Olivia Newton John country era with her core classic country attack intact.  Based on extensive new interviews with Connie herself and with producer Baker by the book’s author Barry Mazor. ‘Connie Smith‐ The Latest Shade of Blue,’ is the third in Bear Family’s chronicle of one of country music’s most masterful vocalists in the years that cemented her reputation and renown, following on the two sets covering her previous years at RCA Victor, ‘Born to Sing’ (1964‐1967) and ‘Just For What I Am’ (1968‐1972). When asked to describe country music, Connie Smith's standard answer is "It's the cry of the heart." Her cry of the heart is her singing, and it's a powerful thing to behold 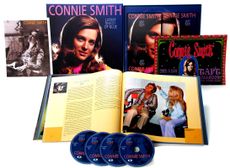