While in Europe the Easter promenade ‐ luckily in the spring sun ‐ is a tradition, in the cities of North America people meet after the church mass on Easter Sunday for the traditional Easter Parade.

Legendary composer Irving Berlin wrote the music for the Hollywood classic ‘Easter Parade’ starring Fred Astaire and Ginger Rogers. The title song can be heard here in the interpretation of Sarah Vaughan & Billy Eckstine! Egbert The Easter Egg is a rare recording that was put on for children at the time and became a classic, heard here in the version performed by Betty Clooney (sister of Rosemary Clooney and aunt of George Clooney). From the then 7‐year‐old British Beverley Bunt you can hear My Choc'late Rabbit, a rare recording as well as that of her compatriots Rex and The Minors with their Triumph single or the two sides of an extremely rare shellac disc by the British Frederic Curzon ‐ in brilliant sound quality. Many rare recordings appear on CD for the first time. Stylistically, the spectrum ranges from rock 'n' roll, country and R&B to jazz/easy listening and pop, with artists such as Noël Coward, Johnny Hodges, Jo Stafford, Jeri Southern, Chris Connor, Vera Lynn and last but not least Bing Crosby. A wonderful soundtrack to the joyful outdoor Easter garden party with the most beautiful sunshine! 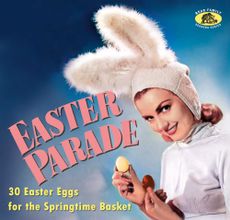