Marcel Riesco’s brand new Bear Family album, ‘Patiently’, further proves the point: Marcel’s velvet vocals paired with grand studio production reminiscing to the big Nashville Sound is a winning combination! If we had to describe his music, it would be pure 1950s rock and roll with a touch of 1960s honky-tonk.

And naturally, we cannot overlook the unmistakable Roy Orbison feel he carries out so well. MARCEL RIESCO PATIENTLY RELEASE DATE: SEPTEMBER 2, 2022 LABEL: BEAR FAMILY CAT NUMBER: BAF14026 FORMAT: 10” VINYL LP PRICE: £ 19.99 GENRE: ROCKABILLY BARCODE: 4000127140265 Marcel’s voice is often compared to a young Roy Orbison, but he has his own style and that is very clear. He is also a mean guitar player and that further helps and solidifies his rockin’ style. His songs are unique, with delicious melodies and intricate arrangements. Marcel explains: “I learned how to sing with Roy Orbison songs. He has been my teacher, so naturally the influence is there. I don’t try though, it just comes out that way.” Incidentally, his role model is Roy Orbison … Like in a good David Lynch film, Marcel dares to break into the mere surface and digs deeper, exploring all possibilities and taking his music farther, to a special place. “I sing directly to whoever might be listening, and I think they can feel this,” Marcel explains. This makes his music magical and unique. Marcel's new album, his first for Bear Family Records®, was recorded primarily at Jack Clement's Cowboy Arms Studio in Nashville, TN. Clement was a producer at Sam Phillips' Sun Studio, and the first record he worked on was Roy Orbison's Rockhouse. “I decided to go to Jack Clement’s studio because I thought it was the only place where I could get the sound I wanted, played the way I wanted, and recorded the way I wanted. I didn’t want anything to go missing.” The CD and digital editions feature 9 originals songs and 5 covers. The 10” LP contains 10 tracks. “I always choose songs that are close to my heart. If it’s an original, I work on it for months even after it’s written, to make sure it lingers. As for the covers, I really have to feel the song. In other words, it has to touch me a certain way, and I have to make it my own before I give it a go. We have included an Orbison-penned title called ‘You’ve Got Love,’ which both Buddy Holly and Johnny Wilson covered. I think my version came out much more rockin’ though." Marcel and the guys recorded 12 songs in 2 days. It was all played and sung live. We got some of Nashville’s top working musicians, who graciously rendered their service: Andy Gibson plays steel guitar, Dennis Crouch plays stand-up bass, Gabe Tonon plays guitar, Walter Hartman plays drums, Cody Campbell plays piano, Isabella Brown sings harmony and backing vocals. 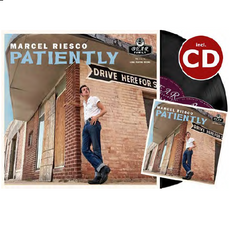 09 How Do You Pretend