What's the first thing you think of when someone mentions Thee Oh Sees? Probably their riot-sparking live show, right? Visions of a guitar-chewing, melody-maiming John Dwyer careening across your cranium, rounded out by a wild-eyed wrecking crew that drives every last hook home like it's a nail in the coffin of what you thought it meant to make 21st-century rock 'n' roll? Yeah, that sounds about right.

But it misses a more important point-how impossible Thee Oh Sees have been to pin down since Dwyer launched the project in the late '90s as a solo break from such sorely missed underground bands as Pink and Brown and Coachwhips. (While Dwyer still records songs on his own, Thee Oh Sees is now a five-piece featuring keyboardist / singer Brigid Dawson, guitarist Petey Dammit, drummer Mike Shoun and multi-instrumentalist / singer Lars Finberg.) That restlessness extends to everything from the towering, thirteen-minute title track of 2010's Warm Smile LP to the mercurial moods of 2008's The Master's Bedroom Is Worth Spending a Night In. Now, Thee Oh Sees chase the home-brewed symphonies of Castlemania with the scrappy, high-wire hooks of Carrion Crawler / The Dream. Originally envisioned as two EPs, it was cut live to tape in less than a week at Chris Woodhouse's Sacramento studio in June, reflecting the battering-ram bent of the band's live show better than any bootleg ever could. "As I'm sure most would agree," explains Dwyer, "Castlemania was more of a vocal tirade. This one's meant to pummel and throb." That it does, whether one blasts the slow, speaker-bruising build of "The Dream," the sunburnt organs and dovetailing guitars of "Crack in Your Eye" or the interstellar instrumental "Chem-Farmer," a perfect example of what happens when one takes a well-oiled machine-a gang of rabid road warriors, really-and adds a second, groove-locked drum set to the mix. To listen is to realize that Dwyer's music is as manic as the underground comic inclinations of his artwork; colorful and confusing in a way that's more than welcome. It's downright refreshing, like a slap in the face at 5:00 in the morning. Or, as Dwyer puts it, "You have to leave a mark somehow." locked groove carousers chase the home-brewed symphonies of ‘castlemania’ with scrappy, high-wire hooks & speaker-bruising tirades. 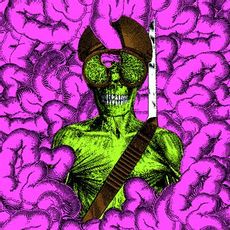