imbued throughout with lee perry's trademark dark, swampy ambience, ‘war ina babylon’ is something of a mountain on the reggae landscape.

but what makes it so remarkable is not just the consistently high quality of the music - indeed, by 1976 one had come to expect nothing but the finest & heaviest grooves from perry & his studio band, the upsetters - rather, it's the fact that max romeo had proved to be such a convincing singer of cultural (or ‘conscious’) reggae after several years of raking it in as a purveyor of the most abject slackness. there's no denying the authority of his admonishing voice here, & the title track (which describes the violent mood during jamaica's 1972 general election) has remained a standard for decades. other highlights include ‘one step forward’ & ‘smile out a style.’ essential to any reggae collection. 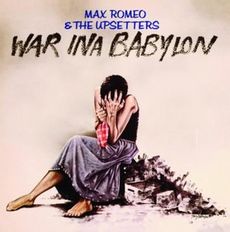