with danger mouse back on board, Patrick carney & dan auerbach’s punchy blues-rock goes & gets all funky.

'El Camino' boasts a no-nonsense brilliance - The pace is fast, the mood is upbeat, the choruses unfailingly stadium-sized. they  churn up that dustbowl road like an ice breaker but it’s not the northwest passage they’re seeking…it’s a siren’s song that has it’s hooks into auerbach, who thrashes & funks his way back towards the women with whom he gets entangled, enraged & exhausted. these songs, which are universally exhilarating, follow themes of break-out-&-run travel, addictive women & toxic relationships with their factory blues & farmhand funk stomps. "for all the scuffs & bruises – dropped drumsticks, filthy riffs, rusted metal – ‘el camino’ is beautifully put together…never losing its grimy old-school identity” - 5/5 mojo, “triumphant” 4/5 – uncut.

natasha recommends : having been pretty obsessed with this lot years ago & loving every second of the rawkus show i saw them play at the then-pressure point / richmond, i was devasted when they got involved with dangermouse & let him totally bland out their thrilling blues-rock sound. like the white stripes, singer/guitarist dan auerbach & drummer patrick carney had been able to create enthralling & devastating records with just the 2 of them but once the mouse joined the party on ‘attack & release’, it felt like the party was over. however, it was simply impossible to resist the funky album opener ‘lonely boy’ (especially when it makes my son leon dance like a nutter) & it turns out, the rest of the album is flippin’ awesome too! i might even have to forgive the rodent for his previous heavy handed production & revisit the albums i’d written off but for now, ‘el camino’ is totally hitting the spot. 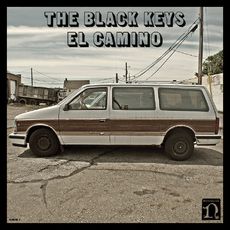