when flying was easy


BRENDAN CANNING of BROKEN SOCIAL SCENE resurrects his old solo group (named after a moustache so bushy it brushes crumbs off a cookie!) for their 1st new album in over a decade.

Cookie Duster originally formed in 1997 but When BSS became the world's favourite alt-rock band, Cookie Duster got filed in the “I'll-get-back-to-that-someday” folder. Now with B.s.s. on indefinite hiatus, Canning returns to his old band & brings Jeen O'Brien (of 90s grunge act Lilith) on board, a criminally underrated vocalist who brings a killer voice, sweet melodies & songwriting savvy to the project - Canning credits her for revitalizing the project. a nostalgic spirit informs the album which has hooks a-plenty & is chockfull of enough buzzes, bleeps & atmospheric ear candy to satisfy even the most finicky audiophile. 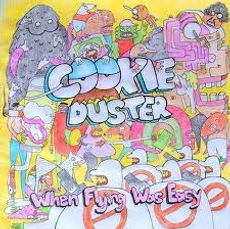