playing in time with the deadbeat

taking dregs from Australian cult icons Feedtime & Venom P Stinger. 'Playin’ In time With The Deadbeat' was written during a year which saw members of this 7 piece endure trips to the mental hospital, jail, court trials, death, rehab, & bouts of violence following thousands of kilometers spent in a van. From the cacophonous gallop of opening track 'Scum', to the hit single potential of 'Adult Living' it is clear the band, have grown heaps as both writers & players. a focused, damaged & unique opus. 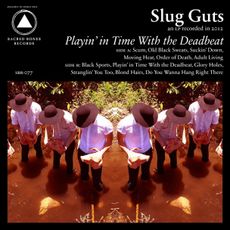