made to love magic


Early in 1967 Nick began to abandon the staple diet of covering other people’s songs supplementing material by Dylan, Bert Jansch and Jackson C Frank with his own material.

Nick’s studious approach to performing well-chosen standards of the time had allowed him to perfect tunings and techniques that were to serve his own songs well - acting as a signature, making his early recordings distinctive and setting himself apart from the fashionable singer-songwriters of his era. The earliest recordings on this album stem from his time at Cambridge University where he met and performed with fellow student Robert Kirby who managed to record several of Nick's new songs onto a stereo tape recorder in the spring of 1968. Robert would use these tapes to write arrangements for the songs with strings and woodwind to be performed in College. Luckily these tapes have survived the rigours of Robert's potting shed and are released here for the first time ever - with only minimal cleaning up - they sound as fresh as when they were recorded. RIVER MAN is the only version known to exist without orchestration and is thought to detail Nick's days in Cambridge, whereas MAYFAIR exists here in its earliest known format, a wry and light hearted view of the London Nick was getting to know. This was later 'properly' recorded by Nick in a stiffer fashion and was covered by Island ska hitmaker, the girl lollipop - Millie. On leaving Cambridge and entering a recording studio, Nick was writing what was to become his debut album ‘Five Leaves Left’. It is presumed that Nick was constantly writing new songs as the recording was carried out in several separate sessions so that some earlier songs were supplemented by later material thought superior. JOEY and CLOTHES OF SAND all recorded towards the end of 1968, never made it onto the album and it is a testament to Nick’s quality control and the impossibly high standards of that debut release that such strong material never made it through the final selection. These two songs plus this alternative version of THE THOUGHTS OF MARY JANE appeared on the bonus disc ‘Time Of No Reply’ that was added to the ‘Fruit Tree’ boxed set. All three have been re-mastered. In early studio sessions Nick used Richard Hewson as an orchestrator, but his unhappiness with the results led him back to colleague Robert Kirby for most future arrangements. By this time the debut album was already too full for MAGIC and TIME OF NO REPLY so Robert’s original arrangements remained on manuscript only. It was to these scores that Robert returned in 2003 and a new ‘original’ arrangement was recorded. Modern technology allowed Nick’s voice to be removed from ‘Magic’ and the track to be sped up to its proper tempo without altering the pitch. You now hear the song as Nick intended it to be heard. TIME OF NO REPLY only ever existed as a vocal and guitar part, so adding the new recording of the original arrangement was easier, and much as would have happened in 1968. The entire session was produced by John Wood. The melting pot that was Island Records in the late 60s caused many artists to collaborate with each other. Label boss and producer Chris Blackwell was a strong believer in cross-fertilisation both in musical styles and personalities. Nick was friends with both John Martyn and Richard Thompson amongst others on the varied roster. In March 1969 Nick found himself in North London’s Morgan Studios – a rare departure from Sound Techniques where most of his work was recorded – to play a version of THREE HOURS with the late ‘Reebop’ Kwaakhu Baah on congas and an unknown flautist. This version was recorded 2 months before the one that appears on ‘Five Leaves Left’. Reebop went on to perform on ‘Welcome To The Canteen’ a live OZ Benefit album that featured many Island luminaries including members of Traffic who he later joined. This version was discovered on a multi track and is released in a mixed version for the first time. It is longer and more relaxed than its final version almost amounting to a ‘jam’ session. After the release of the ‘Pink Moon’ album Nick returned to the studio to record what was thought to be his last 4 songs. These were hastily mixed onto a 7” mono listening tape and these recordings also appeared on the ‘Fruit Tree’ bonus disc. The versions here are properly mixed versions by the original recording engineer; John Wood, from the multi track tape in true stereo. Recorded in 1974, BLACK EYED DOG, RIDER ON THE WHEEL, and VOICES would, it seems from Nick’s notes, have gone to make up the first tracks of a new album. HANGING ON A STAR is a newly discovered take of the song with, it was judged, a better vocal, Nick recording voice and guitar separately for the first time. It was during this recent mix that the tape was allowed to run on and TOW THE LINE made itself known, never having been mixed or, indeed, heard since 1974. Nick left us with a song full of assurance and a contemplative calm that adds another dimension to the notion that he was at the end of any tether at that time. By returning to the team of John Wood and Robert Kirby, and with the full co-operation of Nick’s sister Gabrielle, we have, in this release, a companion piece to the three studio albums: FIVE LEAVES LEFT, BRYTER LAYTER, and PINK MOON. The CD has been digitally mastered using the very latest technology, and is a fitting addition to the short but all-encompassing canon of work Nick recorded in his few years in the studio. 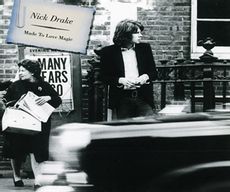