dury's music always bordered on the functional, since it was used as a backdrop for his wry vignettes & stories, but on 1979's 'do it yourself', that aspect came to the fore.

largely abandoning the punk inflections that were scattered throughout 'new boots & panties!', 'do it yourself' is a record of mid-tempo pub rock disco. dury's stories are all wonderful, filled with humour & penetrating detail, formidable when married to such terrific hooks as 'inbetweenies'. 'do it yourself' remains one of dury's very best records, since his lyrical facility throughout the album is simply amazing. 2013 audiophile reissue features original lp art print & free download card on 180 gram heavyweight vinyl. 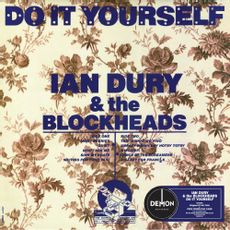