Pushin' Against A Stone

we had already fallen in love with valerie's world of beautiful vintage country, gospel & powerful delta blues from singles 'you can't be told', a song steeped in the authentic sound of southern serenades, her voice ringing through with charisma & hard won soul, & 'workin' woman blues', which unfurls the story of her self-styled 'organic moonshine roots music', coming off like bobby gentry fronting a stax soul revue. elsewhere, there’s the delicate yet rousing triumph of ‘somebody to love’ (featuring the iconic booker t jones), the traditional folk-gospel charm of ‘trials, troubles, tribulations’, the spectral, swampy wooziness of ‘pushin’ against a stone’ (the specials meets phil spector) & the dizzy, harmonised, shangri-la sashay of ‘wanna be on your mind’, with valerie june’s voice sounding as old & wise as mother nature & as playfully naïve as a schoolgirl skipping home. the album was mostly recorded at dan auerbach (the black keys)’s easy eye studio in nashville & was produced by dan auerbach & kevin augunas. 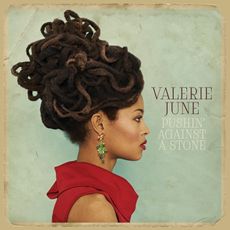