‘Come & Take A Trip With Me. Fantasy You Can Be Sure’ - So begins a heady trip around the world courtesy of Grand Tour. . ‘The Grand Tour’ is an outstanding example of sophisticated North American disco, whilst ‘Flight From Versailles’, as the title suggests, has a much more European flavour along with the insanely catchy ‘Let’s Go Boating’.  a stunning cover of the Yardbirds ‘Still I’m Sad’ is another real highlight. ‘Headin South’ has influences of Dan Hartman whilst ‘On Our Way’ – probably the strongest track – has a lush '70s Euro porn style & a number of funky breakdowns that will resonate with the aficionados as well as the disco curious. Never before released on CD this edition comes with the original 7” edits of ‘Love Is’ & ‘Tight Pants’ & well as brand new edits of ‘Headin’ South’ & ‘On Our Way’. 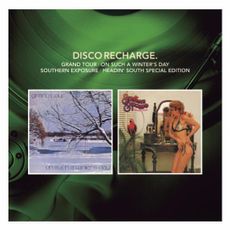