remaining icy yet warm & spacious yet enveloping, with more prominent electronics ‘Shulamith’ reaffirms Poliça as one of the most fascinating & vital groups in forward-thinking pop.

the gayngs offshoot's Channy Leaneagh & producer Ryan Olson with the rest of their polica crew, return with their brilliant 2nd album - the band's debut ‘Give You The Ghost’ became, & remains, one of the stand-out records of 2012. From the flurry of warped metallic electronica & razorsharp groove of opener ‘Chain My Name’, with its stark & rushing refrain, the angular R&B-pop futurism of ‘I Need $’, its sweetly earworm hook belying lyrics of alternately helplessness & defiance, to the gliding, bird’s eye meditation of closer ‘So Leave’, this is a more vivid & progressive record but just as affecting. for fans of austra, ms mr or lamb. 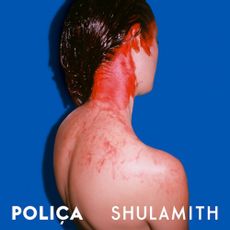