the pain gets a little deeper


a Chicago child prodigy who showed emotional maturity & vocal excellence from his first teenage hit 45 in 1965.

‘The Pain Gets A Little Deeper’ was the soul equivalent of Frankie Lymon’s ‘Why Do Fools Fall In Love’: young, vulnerable, heart-felt vocals that belied the singer’s years. It entered the charts on 1 January 1966 and catapulted the 14 year old to fame in the R&B world, particularly in his home city of Chicago. Elton John has cited the recording as one of the best soul records he had ever heard. The follow-up records were only local hits but many were of exceptional quality & the teenager’s age did not prevent him tackling some serious emotional subjects. This CD covers Darrow’s complete early years up to 1971. 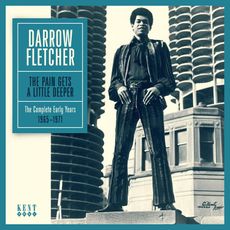