a split 12” with each artist giving us 10+ minute jammers - Sun Araw does a psychedelic version of Neil Young’s “Thrasher” & Ralph does a take on the song Lord Franklin’s Ballad (from about the year 1852).

Most of singer/guitarist Cameron Stallones' work as Sun Araw seems like an extension of a singular character, as though the slow-zooming desert angles of 'Beach Head' were just one episode of a wanderer's exploits before, years later, making it to the city gates during 'On Patrol''s vigilant, sizzling stalk of squiggly guitar echoes & cavernous electro-percussion. However, some of his finest moments are when he steps outside of his own timeline & covers another artist's work, bringing an outside element into his distinct settings - particularly his cover of Teenage Fanclub's 'December' that acted as the B-side to the 'Houston Abstros' 7". Now, spurred from a chance meeting/jam sesh at this past SXSW, Stallones takes on Neil Young's 'Thrasher', a cut from his 1979 LP 'Rust Never Sleeps'. The result is hymn-like, guiding an amorphous collision of Farfisa, wet-waw'd guitar lines & fleeting-spirit vocals through a gradual swell of a dynamic arc, fading away rather than burning out. 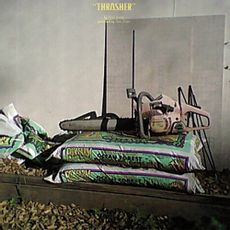