some of the finest fruits from an infamous fertile creative relationship between 2 of the most dedicated & productive bastions of the 1960 / ‘70s eurotica genre.

when spanish director jess franco began to work on italian co-productions he forged a consistent relationship with conductor & arranger bruno nicolai, similar to that of argento / goblin & fellini / rota. this partnership is arguably best illustrated on the soundtrack to this version of ‘de sade’, presented here for the first time with a sharper focus on the free avant-garde elements & the previously unpressed heavier psychedelic music that was prevalent & integral to franco’s tastes. including titles such as ‘drug party’, this set of full-length instrumental songs (as opposed to short cues) benefit from the extra collaborative energies of italian studio luminaries edda dell ’orso (breathy onomatopoeic vocals) & alessandro allesandroni (sitar). 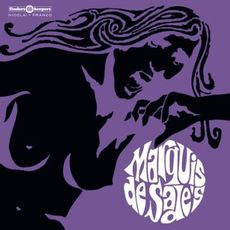