When a band releases a self-titled album, it usually means one of two things - they feel like they’ve made their defining statement, or they ran out of ideas for album titles.

Happily, For Blood Red Shoes, it’s the former. “I feel like this is the strongest thing we’ve ever done....it's our rawest, heaviest, sexiest & most confident sounding record so far", says Steven Ansell, drummer. “It’s the most honest f*cking record we’ve ever made. It’s us completely naked.” a seriously impressive 4th offering that demands we sit up & pay attention. for fans of yeah yeah yeahs, drenge, band of skulls or deap vally. "the riotously fun sound of a band who have well & truly cast off the shackles" 8/10 - the line of best fit.

***Deluxe 2CD edition includes ‘14 Photographs’, a bonus live album taken from shows across Blood Red Shoes’ European tour in late 2012.The LP is pressed on purple and orange splattered vinyl. This format includes a copy of the album on CD, as well as a copy of the bonus CD**** 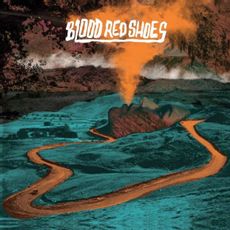