the insanely talented, kid-in-a-sweet-shop musical experimentalist backs up his ambition & style with some serious substance - a true rockstar, showman & musician - 'lazaretto' sees him strut his stuff to staggering effect.

there's nothing more enjoyable than listening to a record made by someone who is clearly enjoying themselves making it & that's exactly what you get here. it's still steeped in the raucous blues rock of the raconteurs & the white stripes but jack adds strings, electronics & vocal variation that make this an electrifying experience. "The title track may be the best thing here, & it's unlike anything White has attempted before: a deranged cocktail of screeching electronics, downhome fiddle & gloriously OTT guitar showboating with a deeply odd, episodic structure & an audible hip-hop influence in his vocal delivery" 4/5 - guardian, "third man maverick shows little sign of mellowing on wild & witty second album" 9/10 - uncut. 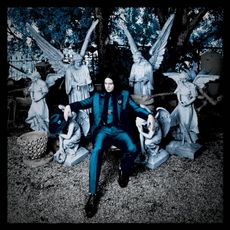