This new Nonesuch recording, performed by the original Public Theater cast & including 7 new songs was written specifically for the musical, features music by David Byrne and Fatboy Slim.

originally released as an album in 2010, with multiple singers performing the lead roles, including Santigold, Florence Welch, Sia, Steve Earle, St. Vincent, Natalie Merchant, Tori Amos & many others. The musical of 'Here Lies Love' premiered at New York’s Public Theater in April 2013 to widespread critical acclaim. It has been hailed by the New York Observer as ‘the must-see event of the season’ & by Vogue as ‘a life-giving, roof-raising, booty-shaking blast of joy’. 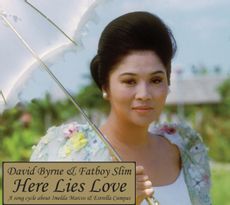